The Women in Blue Berets 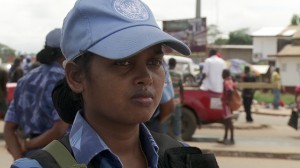 Liberia, a nation scarred by 14 years of brutal civil war, stands at a critical moment in its history as it heads for its second democratic election in October 2011. This election will decide the country’s future course – towards peace and stability or violence and chaos.

Assisting the UN peacekeeping operation is a special unit from India – an all-female police contingent. Deployed yearly since 2007, it is the first such unit to ever take part in a peacekeeping mission.

The all-female contingent is an important experiment for the UN – to rectify the skewed gender ratio within the UN system itself where only 6% of peacekeepers are women, and more importantly, to bring a gendered perspective to conflict resolution and peacemaking.

But for Ruby, Tejinder and Philomena the journey away from their families has been difficult. It is their first time in another country – they have never been so far away from home. Like them, most of the other women in their unit have left behind young children in the care of husbands and relatives. The 12 month duty is tough and just too long. They spend their evenings trying to connect calls back home.

The tension is rising as the election draws nearer. There are frequent clashes between different political parties. Will the Indian policewomen succeed in ensuring that the voting takes place in a safe and trouble-free environment? Will the hardships they suffer to bring peace in far-off lands be worth it in the end?

Written and directed by Farida Pacha